“What am I doing here? What did I sign up for?”

That’s all I could ask myself prior to my first pro wrestling match. I really had no clue how I had ended up where I was. Watching it live was fun, but to actually participate was a different animal. 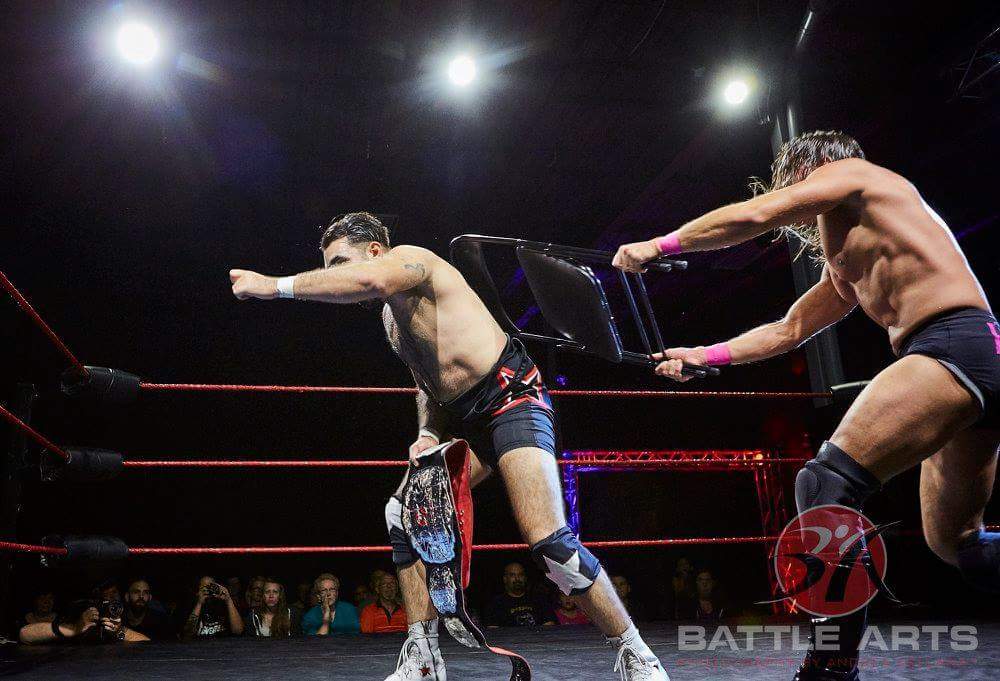 I grew up a fan of pro wrestling. I followed it forever and couldn’t get enough. I even flew down to WrestleMania in Miami in 2012. When I was a kid, I would beg my parents to take me to shows. When I became an adult, I dragged my youngest brother to shows so that it would look like I was taking him.

Now I was finally in a training program. I begrudgingly sold five tickets to the show. I didn’t want to make an ass of myself in front of my family and friends, but I had to sell the tickets to get on the show and to support the gym.

Selling tickets and training was all fun and games. Then the show day came. My nerves were through the roof. I couldn’t even breathe or focus on anything.

Why was I even bothering with this?

I had no clue what I had gotten myself into. I wasn’t sure what was going to happen next. I was very nervous.

And guess what? Now I self-promote harder than anyone in class to bring fans to the shows so that there’s more people in the crowd! I love performing in front of crowds and I live for that rush.

I’m going to give you a behind the scenes look at the economics of becoming a pro wrestler and the crazy journey that I’ve gotten myself involved in. Please keep in mind that this is a wild dream of mine. I earned my Bachelors of Commerce and was supposed to find a safe job. Instead I decide to travel, start Studenomics, and take on multiple adventures.

Below is a talk that I did about my journey at an Ignite event. Enjoy!

The upfront investment is a huge chunk of your time, money, energy and emotions.

In September of 2013, I finally got into pro wrestling. A bit later than I expected (25  years old), but I still started! I’ve learned a bit about breaking in and chasing goals since then and wanted to share some experiences here.

[Must read: How-to avoid being another heartbreaking statistic.]

What’s the financial commitment to wrestling?

The first financial commitment is the money you have to spend on training. Getting trained in wrestling isn’t like going to school for any other trade. It’s difficult to find training. You have to hope there’s a school around you or you’re going to have to move to get trained. The cost of that is simply insane.

Luckily for me, the school opened a five minute drive from my place. Well, I had to move back home. I was able to sell my rental property. I now live beside the school where I train in BJJ, pro wrestling, kettlebells, olympic wrestling, and the other classes that are offered.

For the sake of this article I Googled wrestling schools. I found a credible one up in Calgary, Alberta that costs $4,250 for three months worth of training.

That’s only the cost of tuition. You have to fly yourself out there and pay for a place to stay. Not cheap. Then you need to figure out your food situation. Luckily for me, my school charges a very fair monthly rate and I have access to all of the classes and the entire facility. 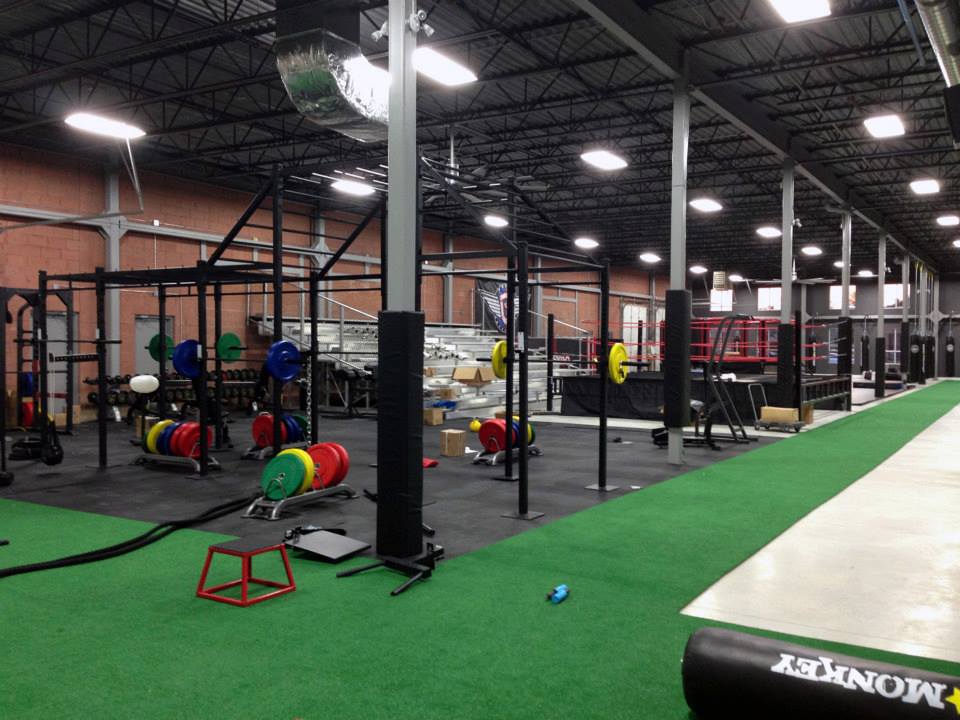 Then comes the other financial commitments. This is the money that you have to spend on looking like a wrestler.

To be fair, I always tried to eat well and took the same supplements. Wrestling topless in front of people sort of forces you to watch what you eat.

Of course, you don’t have to do any of this. You could look like an average guy/girl and rely on talent. However, if you turn on wrestling on your television, you don’t see too many average folks, do you? You want to stand out and look like a star. Why bother doing something if you won’t even do it right?

Looking like a star isn’t cheap when you’re not a star.

Oh, and you also need to pay for slick professional photos like the one below (yes I tried to look like a complete jerk). 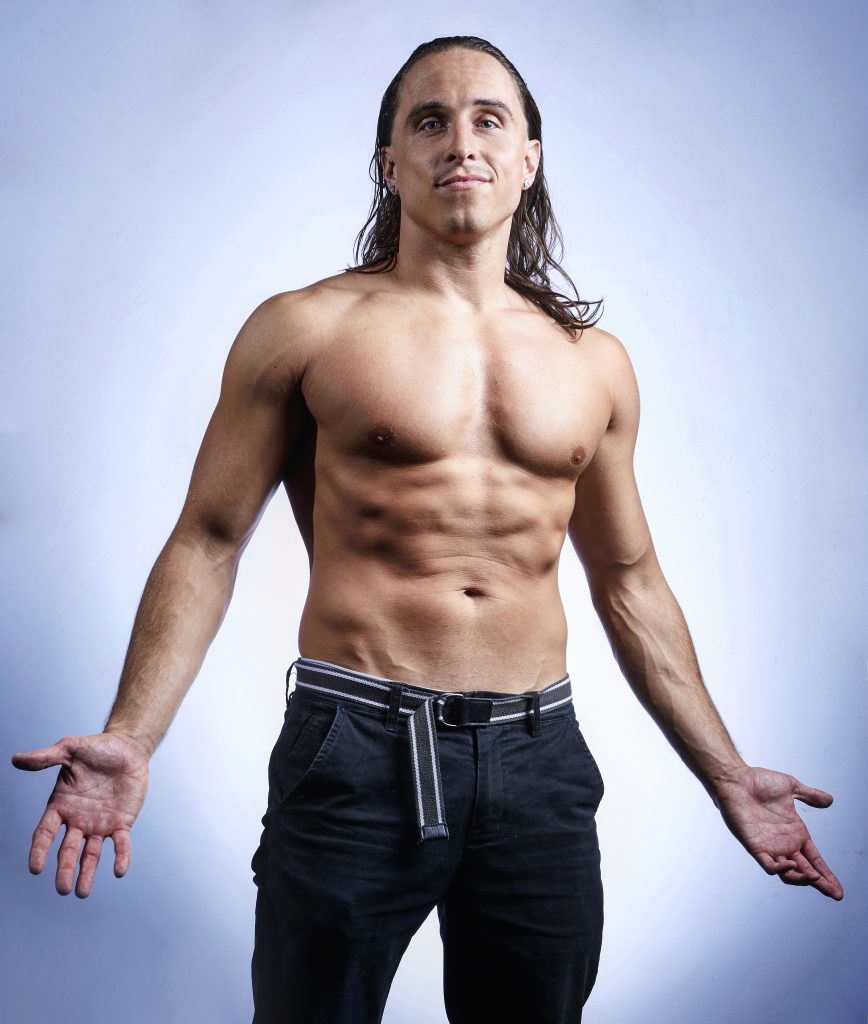 The time that it takes to get trained will eat up most of your free time. Then once you’re trained, you have to figure out a way to get better. You should try to get on shows (almost impossible).

There’s also plenty of time where you’re networking. It’s advised that you attend as many shows as possible to network, help out, and hope to get yourself a match on the card for experience.

Then you have to spend time on watching/studying matches to get better. At least YouTube has made it easy to find matches.

“If you end up with a boring miserable life because you listened to your mom, your dad, your teacher, your priest, or some guy on television telling you how to do your shit, then you deserve it.” — Frank Zappa

How about your emotions? 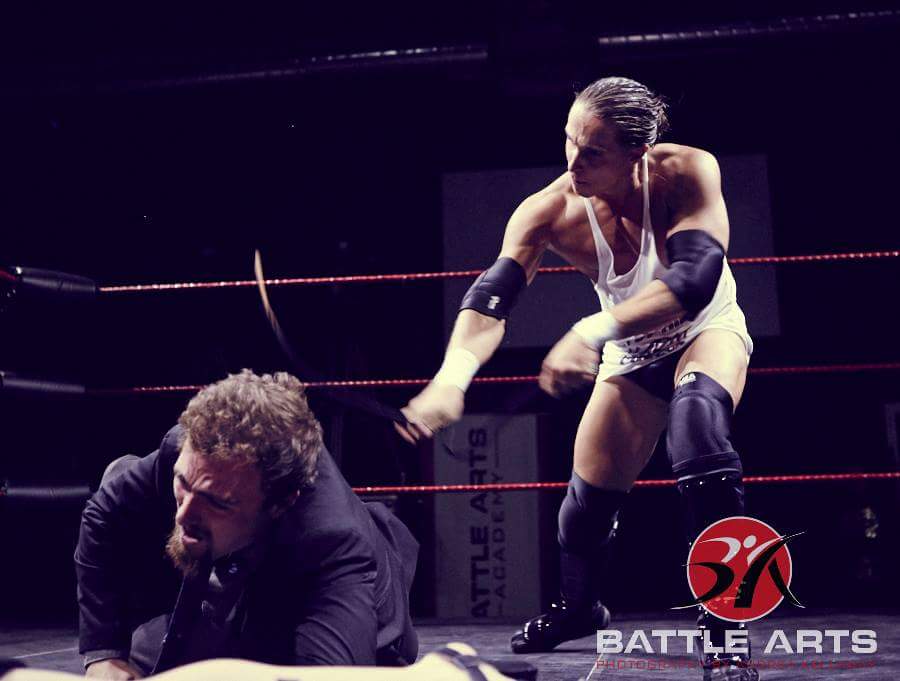 You have to give it your all. You have to risk complete failure every single time you step out there. You risk injury. You risk making a fool out of yourself. You risk it all.

You also can’t be a weak person to get into wrestling. You’re going to get tested. You’ll be taken off shows. You’ll be put in spots you can’t handle. The pressure will get to you. And this is all before you even step out in front of a crowd.

The crowd could hate you. They could love you and cheer you.

Then there’s the worst thing that they could possibly do…

The crowd could not give a crap about you. I believe that indifference is the opposite of love. Indifference is the worst feeling in the world. I would much rather be loved or hated. Either one of those are fine.

To become a pro wrestler, you have to risk your emotions every single day. Not easy for everyone.

“The moment that you feel, just possibly, you are walking down the street naked, exposing too much of your heart and your mind, and what exists on the inside, showing too much of yourself…That is the moment, you might be starting to get it right.” — Neil Gaiman

Is it worth it? 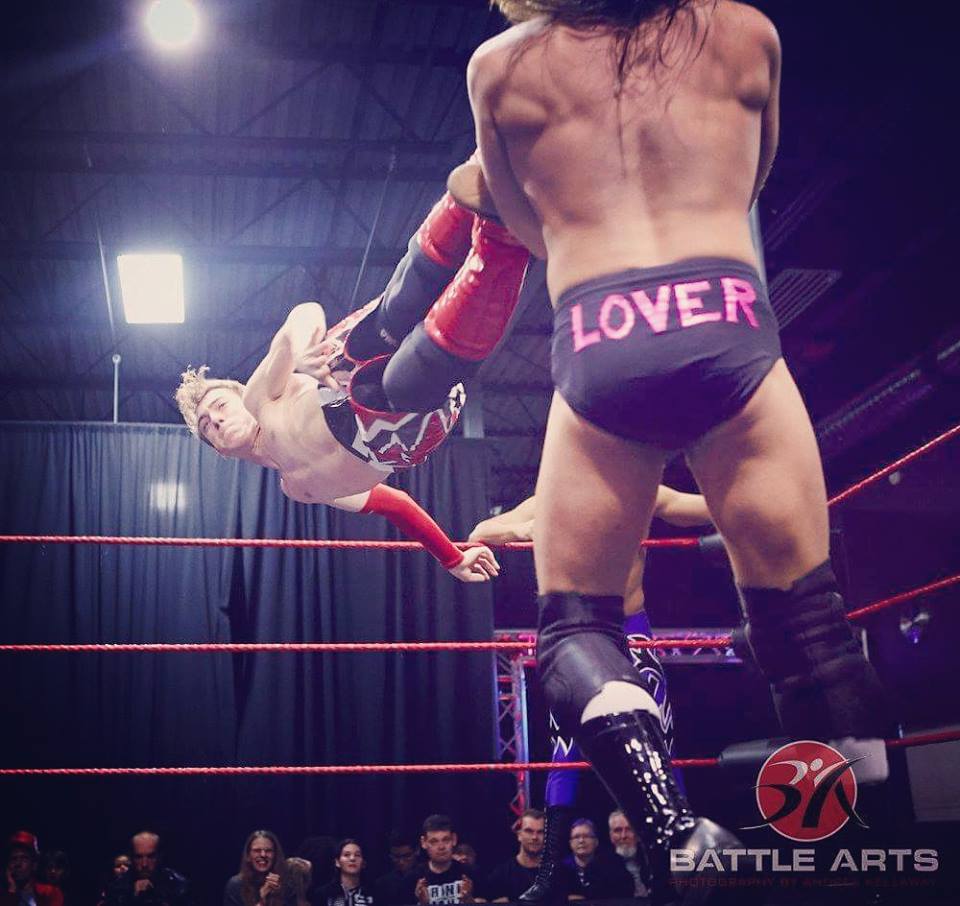 I would much rather say that I tried and failed. The worst feeling in the world is regret.

If you love something, then go for it. Just don’t think you can slack off. You have to be willing to give it your all.

As always, you should be fairly responsible when chasing a dream. Try not to go into debt, don’t hurt others around you, and stay hungry.

Wrapping it up — how do you make it?

To tie everything in together, I wanted to address a few key questions about wrestling.

How do you move up the ranks? What’s the ultimate goal?

It doesn’t matter what country you live in, the goal is to end up in WWE at WrestleMania.

How do you get there? You have to get scouted and invited down for a tryout. Then they sign you to their training program, where you’ll train until they feel that you’re ready for the main show. Then one day, you might just show up on Monday Night Raw. You’re not even guaranteed to move up from the minor leagues to the main show.

I live in Canada and WWE often tours here. Everyone wants to end up in the big time. There are other companies like TNA and ROH that get TV and some national exposure. They also tour.

WWE is the ultimate goal. Until you get there, you have to work for any minor company that will accept you. You should respect your time with a small company, but never forget that nobody ever grows up wanting to play minor league sports for a living.

How much do you get paid while moving up the ranks?

This all depends. When you’re first starting out, getting a match or even getting on the card is pretty impossible. You have to struggle to work for free and to get that experience. Nobody’s in a hurry to hire you or give you work unless you’ve built up a name. This is similar to any type of freelance work or business that you may try to start.

I’m lucky because my gym/training centre puts on shows. So they put us in the ring. Normally, I wouldn’t have even had a match yet at the point in my training that I’m at.

You’re supposed to pay your dues in wrestling first by working for free and getting the experience. You don’t get paid until you get paid. It’s like starting your own business or any other entrepreneurial venture. You’re essentially a freelancer. You have to go out looking for experience. Once you get experience, you have to build a name for yourself. From there, you have to get noticed. Then, you have to make the right friends and get seen by the right people. You also have to become exceptional at your craft so that if the right person sees you, they like what they see. Talent and connections are a winning formula just like in any other field.

So you won’t get paid until you make it. Since I’m just starting, I can’t speak on getting paid yet since I haven’t earned a penny.

Before we part ways today, I urge you to take on a bold challenge.

I’m calling you out. Are you going to keep on complaining or will you follow up on your goals? Your move.

“Lacking an external focus, the mind turns inward on itself and creates problems to solve, even if the problems are undefined or unimportant. If you find a focus, an ambitious goal that seems impossible and forces you to grow, these doubts disappear.” — Tim Ferriss

We show young people how to save money without missing a party because life’s too short to be counting pennies! 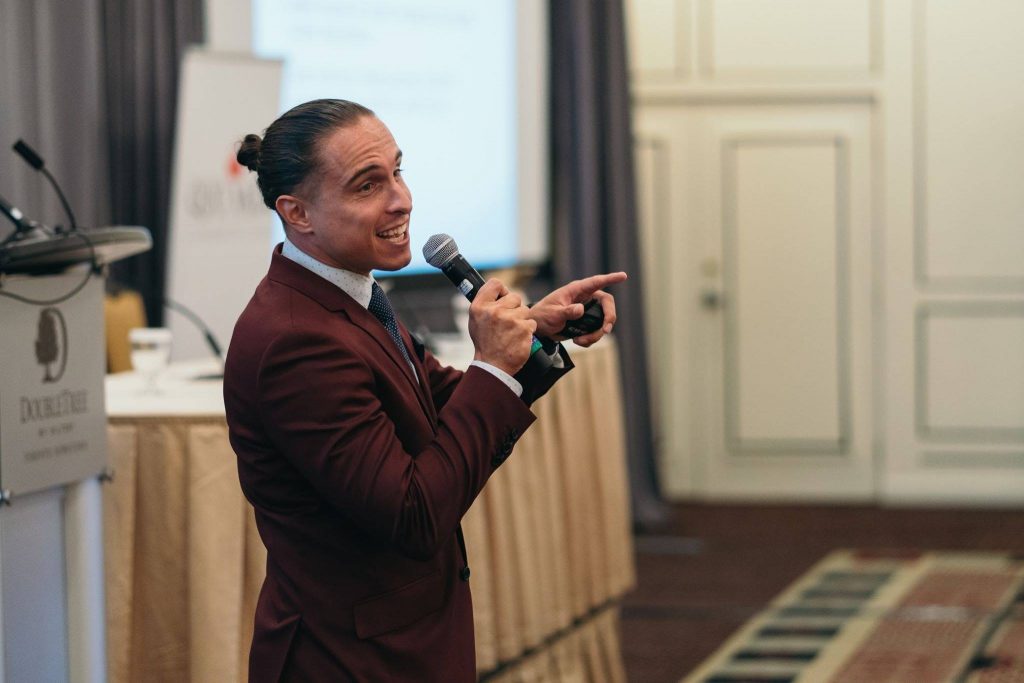 My name is Martin and I’ve been helping readers like you figure out money without ever missing a party since 2008. Planning your weekends is stressful enough. Personal finance should be easy. If you want to make money online, then read this post. If you want to see how I turn coffee into cash, check this story out. 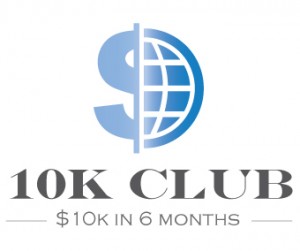